THE ABSURDITY OF DEBT AND OF NOT CANCELLING IT 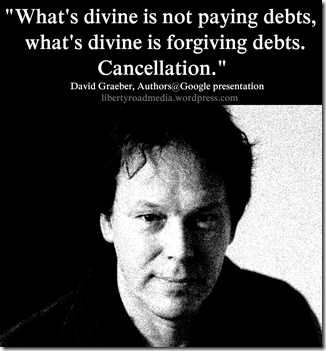 Salon has been on fire with truth lately, this article on student debt being no exception.  From the article, we find out the following very interesting nugget:

The total national student loan debt is more than $1.2 trillion, the bulk of which – about $1 trillion – is owed by students to the federal government. According to a 2013 study, the average debt held by a graduate in 2012 was almost $30,000. Forty million young Americans are saddled with this burden and 7 million of them have defaulted already.

Let that sink in—students owe $1 trillion to the federal government.  The apparent source of that claim is from this July 2013 speech by Rohit Chopra of the Consumer Financial Protection Bureau.  Chopra put it like this:

“The Consumer Financial Protection Bureau estimates that outstanding debt is approaching $1.2 trillion as of May 2013. We also estimate that student loans guaranteed or held by the federal government have now crossed the $1 trillion mark.”

Lest you think this is all a bunch of leftist, socialist, deadbeat-loving, get-out-of-debt-free-card hokum, consider that Forbes Magazine—that notorious commie broadsheet—accepts this figure as correct in a 2013 article titled “How The $1.2 Trillion College Debt Crisis Is Crippling Students, Parents, And The Economy.” 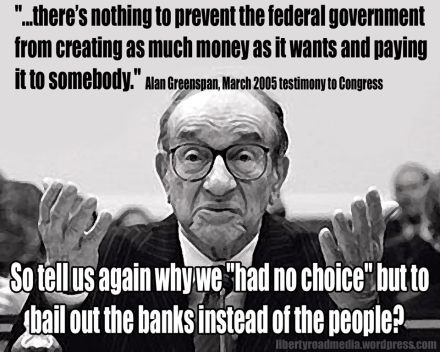 Again, you must keep in mind that all money is created out of thin air.  Indeed, how can a government that is nearly $18 trillion in debt possibly lend to anyone?  I will allow that the answer to that question requires taking into account a few more complexities than we have space for here, but then again–not really.  Because the answer to that question is still, and always has been, that money is created out of thin air.  This is not controversial in the slightest.  And any argument that “but the taxpayers will be screwed” if this $1.2 trillion isn’t repaid is also absurd.  For one thing, taxpayers are already screwed, and again, taxes are not the source of these loans.  Remember, the money for these “loans” comes from thin air, not from taxes or from any money the government has on hand.

So the U.S. government does not need this $1.2 trillion to be paid back for two reasons:

1) there is no loss to the government because the “money” to finance the student “loans” never existed prior to the money being “lent” to students (remember, how can a government that is perpetually in multi-billions or trillions in debt possibly afford to lend out trillions?) and

2) even if the $1.2 trillion were forgiven and considered to be a loss to the government, no worries because suddenly the government can just create/borrow $1.2 trillion more in as much time as it take to enter the ones and zeroes in a computer.  On that score, let me refer you to the Alan Greenspan quote above…

So why not cancel it?

Since the above is true, why not just cancel the student debt and set these people free?  Since the government doesn’t really need the money to be paid back, why force people to pay it back and in fact capitalize the interest (i.e., add unpaid interest to the principal) if it isn’t paid back on the proper schedule?  Indeed, wouldn’t it help the economy at large if the money these student borrowers are being made to pay back to the government—who doesn’t even need the money—could instead be spent at small businesses (or large ones) and pumped into the economy that way?  Of course it would.  Remember, no less a defender of “free market” capitalism than Forbes Magazine (whose motto is “The Capitalist Tool”) worries that the incredible level of student debt is “crippling” the economy (see above).

I’m afraid the answer to the question of why we don’t just cancel the student debt is fairly sinister.  This is just my opinion, but look at it like this: what better way to guarantee a workforce that has to have a job—any job, at any wage—in order to pay back a “loan” that can’t be discharged, even in bankruptcy?  How best to have a workforce that will take whatever it can get and not complain too loudly?  Saddle them with debt—a lot of it—that they can’t get out of.  Keep them from striking out on their own and creating competition for the already established industries simply because their debt-to-income ratios will be so out of whack that they can’t possibly borrow money to start their own businesses, and Lord knows they don’t have the money to do so on their own because they just got out of college and owe tens or hundreds of thousands in debt!

The Salon article points out some of the consequences of this system:

“To slap such exorbitant debt on new graduates, especially in this economy, is an aggressive undermining of human rights. And the punishment for not paying, for those who either can’t find work or are courageous enough to pursue their dreams despite their debt, can be severe: ruined credit, wage garnishment (for those lucky enough to have wages), vicious harassment from collectors and enormous fees as collection of the debt is outsourced to private entities. All of this effectively penalizes poverty. With such immense pressure funneling millions of graduates into whatever menial job they can find in order to begin making payments, student loan debt has been compared to a modern form of indentured servitude.”

Without a doubt, the system is indentured servitude.  Does it also rise to the level of involuntary servitude?  If so, that of course would be unconstitutional.  That’s a topic for another time, but certainly worth pondering.  If the absurdity of corporate “personhood” can be wrenched out of the 14th Amendment, then surely it can’t be too much of a stretch to say that being forced to work any job for any amount of money in order to pay thin-air student debts that can’t be discharged is a violation of the 13th Amendment.  Maybe such an argument wouldn’t have been countenanced 20 or 30 years ago, but the times—they have a-changed…what was once absurd is now completely rational.

What you can do

The Salon article also has a bold suggestion for how to deal with the problem:

“Student loans provide an easy avenue for resistance. Not paying them would be like taking back the bailout money the government gave bankers and other financial criminals in 2009. The dollar amounts aren’t far off, and if American tax dollars can be used for a CEO’s bonus they can damn sure be used for education. It happens one way and not the other because the moneyed CEO can influence policy in a way ordinary Americans can’t. The balance of power can be shifted, but only by collective action. Nothing could send a stronger message than 40 million indebted graduates standing together in a boycott of student loan payments.”

Do we have the stones for a boycott of student loan payments?  Because we gotta do something…