BANK OF AMERICA MODIFICATION SCANDAL: A FRIEND DEALS WITH A FARCE

Below is a little farcical tragicomedy inspired by a message from a friend of mine who dealt with Bank of America’s hampering of HAMP.  It’s what I imagine must have gone on in Bank of America offices when dealing with people like my friend ( and it’s obviously informed by the BoA employee declarations which have recently surfaced), who described his situation like this:

“We were accepted in a trial mod back in Dec 2009, and it was supposed to be 3 months etc…   I called and called, and they said that there was a backlog etc…  In July I got a request for more documentation and due by 8/30/10.

I sent all the documentation that arrived by FedEx on 8/30 at BofA,  like a few days later they sent me a denial letter.  I called and they said I sent in a copy of our 2009 tax return unsigned so that is why we the modification was denied!  I said you have to be kidding me, and they said , no it’s required.

Then they sent me an acceleration of the note letter,   I raised hell, started writing letters, and then getting educated.  I fell for another “in house” modification and then we were denied in December, all along we were making the trial mod payments still.

I then said forget it, and stopped the payments.  After we filed Chapter 13 in 2011, BofA sent a letter in response to one of the many letters I had been sending them, that we were denied, because we did not sign the 4506-T for the tax returns.  I looked in the copies of the documents I sent them in 2010, and there was the 4506-T, filled out and signed, that we had sent to them.

And he’s right–it’s so clear that Bank of America was engaged in purposeful fraud, costing people their money, their homes, and their lives.  It’s unconscionable.

My friend sent me copies of documents proving he HAD mailed in the documents in the allotted time, and then also Bank of America’s responses to those documents.  The redacted documents (and Jack Mark obviously isn’t my friend’s real name) appear in my little farce below as the drama unfolds (I tried to make them talk like gangsters because they are)…

JACK MARK–our man, trying to get a HAMP modification

D. SANTOS: Boss, I just got a FedEx package from dis bozo Jack Mark.  Whaddya want me to do wid’ it?

DEWEY CHEATEM: Just throw it in the pile wid’ the udder ones.

D. SANTOS: Youse want I should mebbe take a look at it, boss?

D. SANTOS: Hello, Bank of America!  How may we help you today?

JACK MARK: Yes, this is Jack Mark and I was just calling to make sure you got my HAMP modification documents.  I have a FedEx tracking record that shows you received them today.

D. SANTOS: Boss!  The bozo is callin’ in to see if we got his package!

DEWEY CHEATEM: Youse know what to do–lie to him and tell him we d’int geddit.  You don’t wanna open no can o’ woims or nuttin’.

D. SANTOS: But he sez he gots a FedEx tracking record that we DID geddem!

DEWEY CHEATEM: Who cares–he ain’t got nuttin’.  Just tell that clown we ain’t got his stinkin’ papers.

D. SANTOS: I’m sorry to keep you waiting, sir.  We did not receive your modification documents today.  Maybe you could resend them.  Let me give you the address–

JACK MARK:  Look, this is crazy.  I sent these documents in good faith, to the right address, and I have a tracking record that I not only sent them, but that you received them.

D. SANTOS: I’m sorry, Mr. Mark.  We’re dealing with a high volume of HAMP modification requests at this time.  If you’d like to resend the documents, I–

JACK MARK: I’ve had enough of this. Goodbye! (slams down phone)

DEWEY CHEATEM: Ya done good, Santos.  Keep that up and youse gonna get dem Target gift cards for sure!

DEWEY CHEATEM: Too bad he didn’t send in his modification documents, cuz now we gotta turn him down for his pwecious widdle modification!  Go ahead and send him dis letter…

D. SANTOS: Sure, boss.  (Reads letter)  I loves dis part about how we gotta turn him down cuz he didn’t send us no documents!  Even tho’ he did!  (Laughing)  Dis is our best job yet, huh, boss?

DEWEY CHEATEM:  It sure is, Santos. It sure is.  I bet you can almost taste dem Target and Bed Bath and whatever gift cards…

DEWEY CHEATEM: Yeh–‘member dat Jack Mark and how he sent in his modification documents, but he didn’t send ’em in, wink wink?

DEWEY CHEATEM:  Now we gotsta send ‘im ‘dis letter. If he don’t pay up we take his house and dem gift cards is all yours dis month!

Yes, and the country and the economy are losers…oh and by the way, below is the letter from the office of Bank of America’s CEO telling my friend he hadn’t sent in his tax document properly, followed by his request to the IRS to send BoA that tax document, which the IRS presumably did like clockwork.  Just to further show how full of Bravo Sierra Bank of America is and what a Charlie Foxtrot this whole scam was/is…

Letter from BoA CEO saying denial was because of no 4506-T: 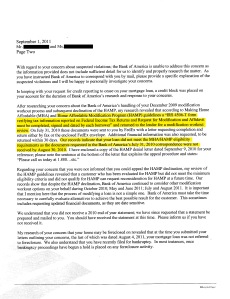 2 Responses to BANK OF AMERICA MODIFICATION SCANDAL: A FRIEND DEALS WITH A FARCE