It’s hilarious when the capitalists try to fearmonger over trying something that might actually help people. Socialism leads to “complete economic calamity?” Isn’t that what capitalism did in 2008? And 1987? And 1971? And 1929? And is about to do any day now? C’mon, fellas! Surely you can do better than this BS!

Here’s a headline from Zero Hedge, referring to the supposed “complete economic calamity” that socialism will lead to… 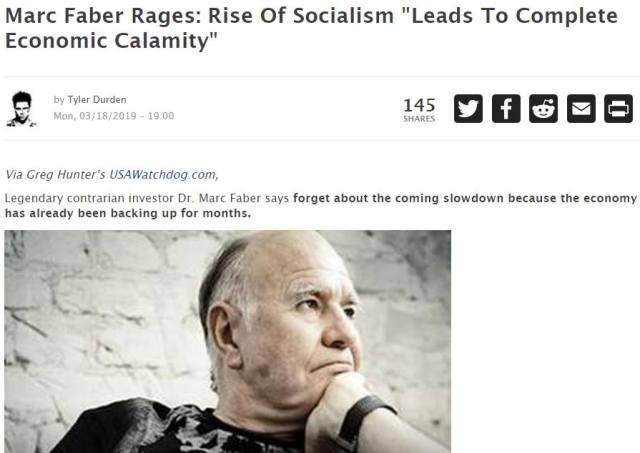 Quick aside: I also find it amusing when Tronald Dump fans can find a thousand ways to pay for the wall and any and every war, but if health care and education come up, suddenly there’s no possible way we can afford it.

I originally only read the headline, but having now read the article, the headline doesn’t really match its content, wherein Faber correctly says:

“Investors are relatively complacent. Nobody thinks a recession has begun. I think a recession in the U.S. probably began in October/November of last year. If you define a recession as peak economic activity and subsequent declining growth rates that can turn overall negative in the process, I think this is happening now in the world. We are probably already in a recession.“

And, even more importantly, he says this:

“When I started to work in 1970 on Wall Street, the stock market capitalization of the U.S. as a percentage of GDP… was between 25% and 30%.

It’s a huge asset bubble compared to the real economy. I think no matter what they do, this asset bubble will be deflated, and it will be very painful. The asset holders are the powerful ones here, and they don’t want it deflated…

The question is would it have been better economically to go into the hospital in 2008/2009 and clean up the system rather than to essentially inject the sick patient with more opioids to keep him alive? It’s going to get much worse the next time it happens.”

So how, pray tell, did they get a socialism scare headline out of these comments of Faber’s that are clearly implicating late capitalism?  Why is it that Faber is saying exactly what a critic of capitalism like say, Michael Hudson has been saying since, y’know, forever, but Faber’s comments get spun in the headline as a critique of socialism when in fact the comments are a critique of capitalism?

Then again, America really is a socialist country, it’s just that it’s socialism for the rich, as we’ve pointed out here many times.