In this largely friendly Fox Business piece from The Willis Report with host Gerri Willis, attorney Linda Tirelli alleges–as do we here at LRM–that Wells Fargo is in fact engaged in fabrication of mortgage documents and is not alone in this practice. 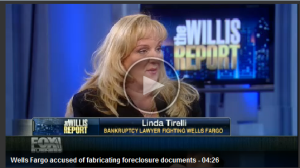 “This is business as usual for all the big banks,” Tirelli said, referring to the manufacture of mortgage documents out of whole cloth in order to establish legal standing to foreclose on homes. In other words, if a bank doesn’t have the proper documentation needed to legally foreclose a mortgage or deed of trust, said bank will simply create the documents and then try to present the documents in court as though they were the originals and the bank had them all along.

“Maybe we’ll actually see a perp walk at some point,” said Tirelli in response to Willis’ question about what Tirelli expects to see as a result of the interest of a number of federal regulators in Tirelli’s allegations.

As one might expect, at one point Willis brings up the pro-bank, forgery-downplaying narrative: “After all, these people had not paid for their house–they hadn’t made their mortgage payments. What’s your response to that?”

Tirelli’s brilliant response: “Regardless of whether someone’s behind in their mortgage–which can happen to anyone in this economy–that doesn’t give a bank or anyone the right to fabricate documents and submit them to a court of law for the purpose of enticing a judge to rely on it and actually foreclose on a home.”

Incredibly, Willis acknowledges that the documents required to foreclose on homes “didn’t exist.” She says this as though such information is uncontroversial–which it is, in reality, though up til this point, most media types like Willis have pretended that it is very controversial–and is common knowledge. Very encouraging for those in the anti-foreclosure-fraud movement. Tirelli’s take on Willis’ comment–“If you don’t have the documents, perhaps you just don’t have the right to foreclose. And that’s certainly not the consumer’s fault.” WOW.

It’s certainly encouraging to see the national media coverage this is generating. Wells Fargo’s response has been tepid thus far, but their damage control will almost certainly soon kick into high gear, with a Wells Fargo representative sitting where Tirelli sat, on Willis’ show branding Tirelli as misguided and uninformed on the nuance of the manual. We must plan our response accordingly.