STOP SYMPATHIZING WITH THE POWERFUL INSTEAD OF THE WEAK

Or perhaps that headline should read: STOP ROOTING FOR THE OVERDOG AND START CHEERING FOR THE UNDERDOG!

Sympathizing with the powerful over the weak is probably the single greatest mind control trick ever played on the public at large.  In the past week, I have received a number of Facebook comments on various posts about Israel-Palestine which actually advocate killing all Palestinians.  As Brand explains in the video—and is commonly known and undisputed–the Palestinians are clearly the weaker party in this situation.  Yet somehow it has gotten in the minds of some of my Facebook friends that the more powerful a party is, the more sympathy they deserve.

And that is ultimately the point of the Hannity segment which Brand dissects above: have sympathy for the powerful, and screw the weak.  The horrible trick of this cruel mindset is that no one who says they want all Palestinians killed thinks that they sympathize with the powerful over the weak.  Instead, they think of themselves as sympathizing with the good guys over the bad guys–equating “good” with “powerful” and “bad” with “weak”–precisely because the powerful make themselves out to be the “good guys” and make the weak out to be “the bad guys,” regardless of the actual moral issues in play. 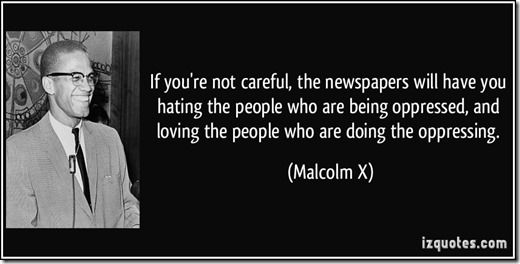 To put this horrible attitude of sympathy for the powerful instead of the weak another way: the rich deserve sympathy, the poor deserve scorn.  Many people feel this way unconsciously, or perhaps subconsciously–they don’t realize they’re favoring the rich and powerful over the poor and weak, even when they themselves are part of the poor and weak.  It’s insanity, and it leads to people hanging on for dear life financially speaking ill of those who have already fallen off the financial cliff, as in: “If those deadbeats had just paid their bills, they wouldn’t have lost their house.”

It’s a classic divide-and-conquer gambit and as noted by Malcolm X in the above quote, it is inculcated by the media, which is of course owned by the rich and the powerful and so therefore the media portrays its owners in the favorable light in which those owners would like to be seen.  And the pervasiveness of the media (which is never any further away than your pocket or your purse) and that subtle, favorable light blinds many people to the reality of even their own plight, keeping them from acting in solidarity with those who share that plight, whatever that happens to be.  Indeed, not only is solidarity prevented, but it turns people of the same plight/class/social stratum virulently against each other.

And that is exactly the point of this–to keep us from challenging the rich and the powerful by sowing in-fighting.  Puts one in mind of the Bob Marley tune “Top Ranking”:

Obviously this has been going on since time immemorial, but isn’t about time we recognized this tactic for the joke it is and snap out of our conditioning?   When did it start to become acceptable or the norm to stop rooting for the underdog and start bowing down to the overdog?

As the saying goes, “things will go on until they can’t.”  So let’s create an environment where this divide and conquer craziness can’t continue.