Does Money Exist? Of Course Not. 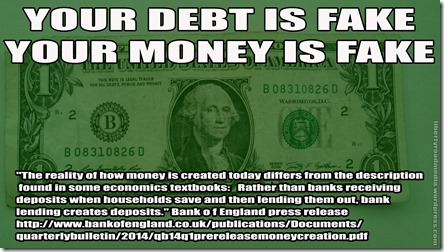 I was heartened to see the headline “Money Doesn’t Exist” on Zero Hedge today, even if the article did turn out to be more or less an ad for a Forex trading system.  From the article:

“The biggest secret the Elite doesn’t want the have-nots to know: Money Doesn’t Exist!…The basis of the global financial system is built on a foundation of simple abstract concepts such as money, debt, finance, liquidity, equity, and trade.  Money is a concept, an idea.  It’s a medium of exchange – not a store of value!”

“…There’s little difference between ‘play’ money and Federal Reserve Notes, except that people ‘believe’ in the Federal Reserve System.  Money is a belief, a dogma – more than a financial system.

But let’s be practical about the global monetary system – there’s no conspiracy, it’s simply a means of maintaining the status quo.  Work is outdated, there needs to be a modern tool to keep the Elite “Elite” otherwise who would dig all the ditches?  And more practically, big business, and global empire, needs a good accounting system.  Money isn’t so much an enslavement system (although it is – but only because users ‘choose’ not to understand finance and basic math) as it is a means to create wealth and expand empire.”

This is the key concept that most people cannot wrap their heads around, that money does not exist in nature and can only be “created” out of nothing.  I asked the question “DOES MONEY EXIST?” a couple years ago and came to this conclusion:

“…Money does not exist.  It’s not that I haven’t thought that before or said it a million times and written about it before.  I’m not sure why Fox’s explanation made me think it again, but it did.

Because when you really think about it, since the money is created out of thin air, that necessarily means it doesn’t exist.   The Fed can no more say that the $20 million in Fox’s above example exists in any sort of objective reality any more than you or I could say that we have, I don’t know, super powers or something, because in objective reality, we do not.

In other words, money is fictional.  Imaginary. Think about that for a minute, particularly if it sounds wrong or nonsensical to you.  Let it sink in.  Try not to let what you’ve been told your entire life about money get in the way of understanding this very simple concept.

The truth hurts.  But it is still the truth.  And once we understand this truth, we face more difficult, painful questions, i.e., why should we let this continue?  How best to get out of this false reality?”

OK, you might say, I can finally accept that money doesn’t exist—but so what?  Well, that is the question—what do we do with that knowledge?  As always, my proposal is this:

“The solution to these problems, then, is self-issued currency.  That is, every citizen in a fiat system ought to have the ability to issue his or her own money, up to any amount needed.  [NOTE 8-5-15: By “his or her own money”, I mean money denominated in the national currency, i.e., dollars, euro, etc.  I do not mean that each person would issue his or own personal currency named after him or herself, as some critics of this idea apparently misunderstood.]  This will solve both of the problems above, because when self-issued currency becomes the norm, paying money will be as easy and as painless and as much as an afterthought as saying “Thank you” is now.  Problem one solved.  And obviously problem two is solved because there would be no monopoly on the issuance of currency, hence no unnecessary control over anyone or anything, either by the state or by the issuer of the state’s currency.

For those that might recoil in horror at such an idea, keep in mind that all money is fictional.  In fact, all money is already self-issued, as will be shown below.  Money must be created by someone, somewhere, because money does not exist in nature–except to the extent that a natural item like gold or salt might be assigned the properties of money.  Despite what the typical Western economics professor might say, money does not just naturally come into being as a consequence of people needing to exchange things.”

But wait, you might say—I thought money was fake? Why do you want to keep using money, even if it is self-issued?  Well, I covered that in “Beat The Banks At Their Own Game: Self-Issued Currency In Action (Part Two)”:

“Why even bother with a currency at all, one might wonder,  if the self-issued currency essentially makes everything free?  Well, that’s just it—things aren’t “free” in the self-issued currency scheme.  Prices would still be denominated in the national currency and self-issued checks would be written for those amounts.  But the checks would function more as a “thank you note”—again, an acknowledgment that person A did something for or gave something to person B.    That’s what money is already, we just aren’t trained to think of it that way.  That is, all money is already fake and already worthless, even in the Federal Reserve/modern central bank scheme under which we live.  Indeed, “Federal Reserve Notes” and “thank you notes” are both notes, they’re only distinguishable by their legal status, not by their value.  And that’s why self-issued currency is more palatable than no currency at all—because people want an acknowledgment of a transaction.  They don’t want to feel that someone got something over on them or that somebody got something for nothing.  For that reason, there needs to be some form of currency, but it should be self-issued and not state- or bank-issued.”

Something like this is inevitable in the future, as more and more people get wise to the fact that money doesn’t exist.  I’m overjoyed to see Zero Hedge hipping its large audience that that very important truth!