It’s kind of hilarious to read the comments below this great article–“The Reason The Police in The U.S. Routinely Kills, Tortures, and Lies With Impunity–from Daily Kos.  The commenters can’t seem to accept the reality that is staring them and everyone else in the face, i.e., that we are living in a police state. We recently addressed this same phenomenon in the piece “Stop Pretending That We Are Living In A 50s Sitcom”:

“And clearly, that’s what we must do now—accept the enormity of what is happening to us. See things for what they are. Turn off the “news.” Talk to other people. Realize that America is not now what it never was–a 1950s paradise that everyone wants to believe in even though it isn’t now and never was real–and act accordingly.“

So first, some quotes from the great article by Ray Pensador:

“But just like at some point we have to learn that there is no Santa Claus (and worst, that he actually does not come down the chimney on Christmas eve), one day it will be necessary for people to understand that we already lost the last remnants of democracy, and that we are in the middle of an imposition of a corporatist police state.

Please, for those “good citizens” who are going to exhibit the typical knee-jerk reaction to this type of criticism of the police, like ‘How dare you impugn police officers; they put their lives on the line every day; most of them are decent, law abiding, and take their oath to protect and serve very seriously,’ I ask you to first read this diary carefully before you react in such a fashion.

It all starts at the top.  Equal justice under the law does not exist in this country.  In reality, the concept has always been kind of a farce, but it has never been this grotesque, this in-your-face.

We have a two-tiered justice system.  One overtly lenient and convenient for the top 1 percent, and one increasingly punishing and draconian for the rest of us.“ 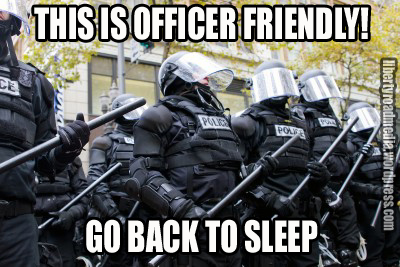 That we have a two-tiered justice system has never been in debate, it’s just that it was always something that the poor and minorities were forced to deal with–or so the story goes.  Indeed, the doctors and lawyers who find themselves railroaded in foreclosure court are now beginning to realize what a two-tiered justice system is all about and that if it can happen to them, it can happen–and is happening–to everyone.  They are beginning to WTFU!

“In the meantime, the real terrorizing, the real crime (at a massive, massive level) is being committed by the criminal ruling elite.  But because they are doing it piecemeal, slowly, deliberately, the populace can’t grasp the depths of the depravity and predation behind it.”

To which I scream: Exactly!  The people can’t grasp the depths of the depravity and predation not only because of the pace of it, but also because they are under literal mind control and have been since birth.  Again, back to the idea behind the 50s sitcom article–we are taught to believe that “men are men and women are pretty and polite and children are obedient and bankers lend out deposits and everybody goes to church on Sundays” and–as Pensador is telling us– that Officer Friendly is here to protect us!   The sick joke is that none of this could be more untrue–not only now, but always.

Took me a while to figure out what “CT” is

As mentioned earlier, the comments to this article are priceless in their naivete, as they mostly revolve around whether or not Pensador’s article is “CT.”  At first I thought maybe I had missed some reference to Connecticut in the article or that it was an inside joke on Daily Kos or that it was the initials of one of DK’s many diarists.

Eventually I got it, though: “CT” stands for “conspiracy theory.”  I should point out that the reason I had never seen this acronym before is because I almost never visit Daily Kos, and the comments to this article remind me why.

Those who think that Pensador’s article is “CT” will undoubtedly–if they live through what’s happening and what’s in store for us–find themselves very sympathetic to the Solzhenitsyn quote:  “And how we burned in the camps later…And even more – we had no awareness of the real situation…. We purely and simply deserved everything that happened afterward.” 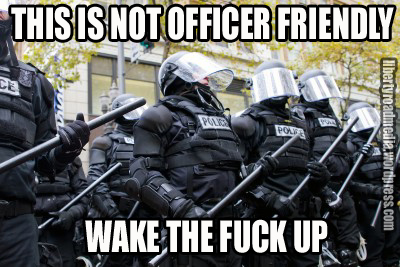