DEBT BY DESIGN: “IT’S IMPOSSIBLE TO WORK YOUR WAY THROUGH COLLEGE NOW…” 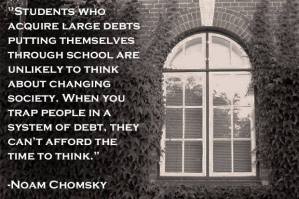 And that’s the point of all these bubbles, and QE, and ZIRP, and inflation– it forces you to finance what you could once buy outright through working. This is the true end game of the “Nixon Shock,” petrodollar, credit bubbles, etc.   This is the result of 1971, only 42 years ago.  Since then, inflation has gone through the roof, while incomes have stagnated and/or barely kept up with inflation for all but the smallest percentage of Americans.  It’s why, as we like to harp on here–in 37 states, over half of consumers have “subprime credit.”  That’s what you get when the following happens, as reported by Zero Hedge:

“‘It’s impossible to work your way through college nowadays’…is the hard-to-swallow (but not entirely surprising) conclusion of Randal Olson’s research into just how extreme national tuition costs have become in the US. As The Atlantic notes, the economic cards are stacked such that today’s average college student, without support from financial aid and family resources, would need to complete at least 48 hours of minimum-wage work a week to pay for his courses.”

Randall Olson’s research was based on the cost of tuition at Michigan State (MSU), and concluded the following:

“What we see is a startling trend: Modern students have to work as much as 6x longer to pay for college than 30 years ago. Given the reports that a growing number of college students are working minimum wage jobs, this spells serious trouble for any student who hopes to work their way through college without any additional support.

Let’s crunch a few more numbers to see what a typical year would look like for a student in 1979 and 2013 working her way through college. Most students take 12 credit hours per semester and only attend Fall and Spring semester. That’s 24 credit hours per year.

The 1979 student would have to work about 10 weeks at a part-time job (~203 hours) — basically, they could pay for tuition just by working part-time over the Summer. In contrast, the 2013 student would have to work for 35 ½ weeks (~1420 hours) — over half the year — at a full-time job to pay for the same number of credit hours. If you’ve ever attended college full-time, you know that this is basically impossible.”

Now, this post is meant to highlight what is but one–albeit a particularly egregious–by-product of financialization that has consumed the productive economy and brought the non-productive economy, i.e., banks, to the fore.  Indeed, note Olson’s baseline date–1979, not yet a decade after Nixon closed the gold window.

As Olson notes, it’s difficult to pay for college with unless you work full-time and go to school full-time, which is impossible.  It’s impossible because if one went to college from say, 8-noon Mon.-Fri. and then worked 1 p.m.-9 p.m. Mon.-Fri., when does one do one’s papers or read one’s books?  Well, the 3-4 hour window between going to bed at midnight or 1 a.m., some wags might say.  That 3-4 hour window, of course, has to be shared with other necessary tasks, such as traveling back home from the work place, eating, washing clothes, cleaning house, showering, etc.

At any rate, the point is not really about college–it’s about things that used to be affordable are not any more, and that’s they way The Financial System likes it–the more non-dischargeable student loans, the better!