BANKS ARE A THREAT TO SOCIETY, NOT MARY MCCULLEY 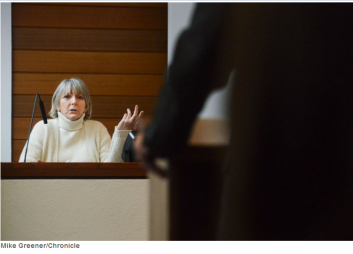 This is unbelievable.  Absurd.  Kafkaesque.

Mary McCulley was sent to jail yesterday because supposedly she is a “public risk” and doesn’t “respect the law”:

“BUTTE – A federal judge chose to give a Kentucky woman a longer prison sentence than recommended after concluding that her impersonation of a federal officer and threatening behavior showed her to be a public risk.

U.S. District Judge Sam. E. Haddon sentenced Mary Ann McCulley, 54, to one year in federal prison and one year of probation for impersonating a federal officer.”

That last name in the list of bank CEOs–Richard K. Davis–is the CEO of US Bank, against whom McCulley recently was awarded $6 million dollars in punitive and actual damages.  The judge in her case recently denied US Bank’s motion to reduce the damages.

So what did US Bank do to McCulley?  Again, David Dayen recently summed it up very well:

“…[McCulley] had her loan changed by U.S. Bank without her knowledge, from a $300,000 30-year loan to a $200,000 loan due in 18 months, and in documents submitted to the court, U.S. Bank included four separate loan applications with different terms.”

This led McCulley into a years-long legal battle with US Bank, during which she basically lost everything and even attempted suicide.  She attempted to get the FBI and other government agencies to help her, but they wouldn’t.

So it is absurd for the judge to now accuse her of “taking the law into her own hands”–what choice did she have?  If she didn’t do what she did, she would’ve lost her case and US Bank’s criminal behavior wouldn’t have been revealed.  Which of course is the point of this witch hunt against McCulley–they don’t want their crimes brought into the light.

Banks, not the people, are the real threat to society

Ultimately, this sentence is not about McCulley, even though she surely is the one who will have to do the time.  This sentence is about sending a warning to all of us: don’t challenge the banks, because they are terrified that we will beat them like McCulley did.  And that is what they don’t want.  They don’t want their fraud system challenged.  They want you to just lay down and accept it.

Mary McCulley didn’t, and she is now paying the price.  But they can’t put us all in jail.  Which is where they want us, because it is the banks who are the real threat to society and to public safety.  It is the banks, not the Mary McCulleys of the world, who brought the world into financial ruin and have driven millions into homelessness, poverty, bankruptcy, and suicide.

It’s completely backward: the non-threat to society is put in jail while the actual threat to society goes free.  Timothy Racicot, the Assistant U.S. Attorney said she needs to “respect the law.”  Oh, like US Bank “respects the law?”  This is madness…

7 Responses to BANKS ARE A THREAT TO SOCIETY, NOT MARY MCCULLEY