THE HOLY FATHER IS RIGHT ON THE MONEY ABOUT “REDISTRIBUTION” 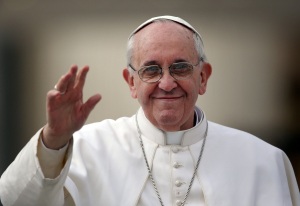 The headline of almost every news story about the Pope’s  speech to the United Nations went with, in one form or another, the idea that the Pope wants redistribution of wealth from the rich to the poor, even though this is what he actually said:

“I do not hesitate to state, as did my predecessors, that equitable economic and social progress can only be attained by joining scientific and technical abilities with an unfailing commitment to solidarity accompanied by a generous and disinterested spirit of gratuitousness at every level. A contribution to this equitable development will also be made both by international activity aimed at the integral human development of all the world’s peoples and by the legitimate redistribution of economic benefits by the State, as well as indispensable cooperation between the private sector and civil society.”

Notice that he used the word “equitable” twice in the above quote and used the word “redistribution” only once–the only time he used either of those words in the whole speech.

In other words, the Pope is more concerned about equity, i.e., fairness and equality, than he is about taking from the rich and giving to the poor.

Some people are freaking out that the Pope is a communist and that redistribution is theft and doesn’t work.  For example:

“With his third major address infused with socialist buzzwords, it seems to be official. Pope Francis is the first Commie Pope. And this is a big problem for the Catholic Church and they’d better get a handle on it.

First of all it is disgusting that any member of the cloth would advocate for communism like this Pope seems to be doing. Communism and its sister ideologies socialism and Nazism are responsible for the deaths of more humans than anything man has ever done. Yes, even more than religion–In fact, more than all religions combined. If you are in favor of communism/socialism/Naziism (and there is no material difference between them), then you are an apologist for mass murder. It really is just that simple.”

This is clearly a desperate attempt to conflate economic justice with mass murder.  It’s an extremely weak and illogical argument, but unfortunately some people will still find themselves in agreement with it.  Are we really to believe that if we don’t want people to live in filth and squalor, dying of hunger and/or malnutrition, that somehow that makes us the moral equivalent of Adolf Hitler or Joseph Stalin?

And why does the piece above leave so-called American capitalism out of its pathetic litany of mass murder?  Trans-Atlantic African slave trade, anyone?  Indian eradication?  Use of chemical and nuclear weapons, i.e., Hiroshima, Nagasaki, and Vietnam? Millions killed in Iraq, both before and during the 2003 war?  “Capitalism” is no benign, harmless, equalizing entity, certainly not as it is practiced in the West.

America is an oligarchy

In fact, the United States has been found to be an oligarchy, contrary to what its citizens are repeatedly told and led to believe about their own country:

“America is no longer a democracy — never mind the democratic republic envisioned by Founding Fathers.

Rather, it has taken a turn down elitist lane and become a country led by a small dominant class

comprised of powerful members who exert total control over the general population — an oligarchy, said a new study jointly conducted by Princeton and Northwestern universities.

One finding in the study

In fact, there is a truism that many have expressed (I first heard it from Gore Vidal) that sums up this report:

“Gore Vidal, the recently demised American writer, once famously quipped that the US economic system is ‘free enterprise for the poor and socialism for the rich.‘”

That fact is really beyond dispute at this point, so the Pope makes an excellent point that there need to be equitable solutions to these problems of poverty.

Unfortunately for the rich, that will likely involve some sort of redistribution, not necessarily by coming into their million-dollar homes and taking their art collections or raiding their offshore accounts, but certainly by letting their enterprises fail when they act stupidly–instead of bailing them out–and by ending other forms of bailout and upward redistribution such as quantitative easing, subsidies, tax breaks, and other forms of corporate welfare.

In other words, “equitable economic and social progress” does not mean “kill the rich.”  Not necessarily.

“Redistribution” only undoes the original, rapacious distribution from the bottom to the top

That sort of criticism is fairly typical of the defenders of what I’ve long called “reverse socialism,” namely the idea that “our theory is absolutely correct even if it’s terrible in practice.” Reverse socialism is, of course, the system to which we are currently yoked and can be defined in a few words: profits are privatized while losses are socialized. The 2008 bailout springs immediately to mind as does the Cyprus “bail-in” of this year. Another way to define reverse socialism in a few words: “too big to fail.”

Redistribution: not what they’d have you believe

The PolicyMic article does make a really good point with which I totally agree:

“Redistribution is totalitarian and oppressive.”

However, the redistribution is going in the complete opposite direction, from the poor and middle class to the very wealthy. And that’s not just me saying that, that’s Stanley Druckenmiller, again, a well-known hedge fund manger. He says exactly that in this video (at 10 seconds in):

If you didn’t watch the video, he said:

“This is the biggest redistribution of wealth from the middle class and the poor to the rich ever.”

What’s he talking about? The Fed’s decision to NOT stop QE unlimited, which is the Fed’s injection of $85 billion a month into the banking system.

When the pope agrees with a hedge fund manager whose last company had $12 billion in assets as of 2010, maybe we are in fact getting to the heart of the matter, i.e., that putting the lipstick of “capitalism” on the pig of reverse socialism is not getting us anywhere near to anything like the right to “life, liberty, and the pursuit of happiness” that are among our “unalienable rights” that our government is supposed to be insuring for all of us.