“GOTCHA” IS FOR LITTLE PEOPLE, NOT FOR BILLIONAIRES

“Gotcha”:  If YOU break a securities law, you’ll be thrown under the jail.  If a private equity firm breaks securities laws, the SEC will just look the other way and offer lame excuses as to why they looked the other way, as Yves Smith details here:

“…the SEC has now announced that more than 50 percent of private equity firms it has audited have engaged in serious infractions of securities laws. These abuses were detected thanks to to Dodd Frank. Private equity general partners had been unregulated until early 2012, when they were required to SEC regulation as investment advisers.”

This announcement was made by SEC hack (and future private equity partner, natch) Andrew (Drew) Bowden in a speech to a bunch of criminals…er, people from private equity firms.  What was the lame excuse that Bowden offered?  Check this out:

“We believe that most people in the industry are trying to do the right thing, to help their clients, to grow their business, and to provide for their owners and employees. We therefore believe that we can most effectively fulfill our mission to promote compliance by sharing as much information as we can with the industry, knowing that people will use it to measure their firms and to self-correct where necessary. Put another way, we are not engaged in a game of  ‘gotcha.’“

Oh thank goodness–I’m so glad they’re not playing “gotcha.”  That’s so comforting.  I was worried there for a minute. 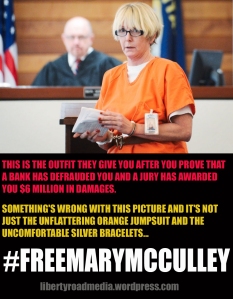 Want a specific, representative example of how the government does play gotcha with people who aren’t billionaires? Mary McCulley.  She supposedly impersonates an FBI agent and gets a year in prison–supposedly she told some title company hack that she worked for the FBI and then interviewed him.  Ultimately she won a $6 million judgment against US Bank because they committed fraud against McCulley and lied to the court (judge’s words).

This entire “impersonation” charge is viewed as highly suspicious by many people close to the case, but let’s assume it’s completely true.  Let’s assume that McCulley did exactly what she was accused of and told some guy she was an FBI agent.  She received no monetary gain from it.  She really received no benefit at all from it, in fact she’s in jail now and will be until around this time next year.  The government definitely played “gotcha” with Mary McCulley.

“Needless to say, this overly cozy arrangement has proven to be a ripe breeding ground for illegal conduct. Again from Bowden:

By far, the most common observation our examiners have made when examining private equity firms has to do with the adviser’s collection of fees and allocation of expenses. When we have examined how fees and expenses are handled by advisers to private equity funds, we have identified what we believe are violations of law or material weaknesses in controls over 50% of the time.

He went on to describe some of the common fee skimming models. For example:

Some of the most common deficiencies we see in private equity in the area of fees and expenses occur in firm’s use of consultants, also known as “Operating Partners,” whom advisers promote as providing their portfolio companies with consulting services or other assistance that the portfolio companies could not independently afford.

So there you go. Just another day in the farce that America has become, in which the regulators admit that they know for sure the law has been broken by private equity management but don’t do anything about it while it’s actually unclear whether a non-billionaire has broken any law or not and she’s sent straight to jail.  “Gotcha,” indeed.