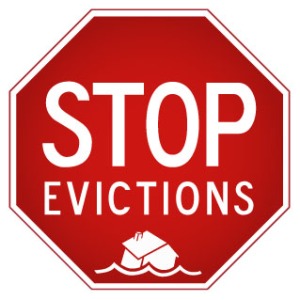 Michigan anti-fraudclosure warrior KathyJo Torrenga has been served eviction papers and has a hearing on the matter Wednesday, July 9th at 1:00 pm in Courtroom 4, Michigan’s 60th District Court.  Torrenga arrived at this point in what we now know is the usual manner: fly-by-night originator now out of business, questionable if not outright fraudulent assignments to a non-existent and/or unfunded trust long after the cutoff date, Bank of America entering the picture, which led to typical HAMP foolishness on BoA’s part (“Mrs. Torrenga, could you resend your documents again…we seem to have…snicker…lost them…again“), foreclosure ultimately and inexplicably done at the supposed behest of Citi instead of BoA.  And so on.  We know the drill by now–confuse, obfuscate, redirect, misdirect–shell game.  And it stinks to high heaven.

At any rate, the Plaintiff in the matter of the eviction is apparently an entity called “Focus RE, LLC,” and according to Torrenga, this entity is being represented by David Bowen of Bowen Law Offices.  Not much information appears to be available online regarding “Focus RE, LLC,” at least not a Focus Real Estate entity that would deal with homes in Michigan.

However, there is a ton of information on the purported “investor” in Torrenga’s property–i.e., one Dave Trott–who Torrenga says is listed as such on her documents and records.  Trott is a candidate for the U.S. House of Representatives from the 11th Congressional District of Michigan.  Interestingly, according to the Detroit Free Press, his law firm Trott & Trott is the biggest foreclosure firm in Michigan and once foreclosed on 80,000 people in a single year!  And that number came from Trott himself!  The paper had this to say about Trott’s booming business:

“Trott became a leader in the foreclosure industry that boomed in 2008 when the housing market went bust by buying up companies needed to complete a foreclosure from beginning to end. And he profits at each step of the process.”

Oh yes, turns out Trott isn’t just the banks’ go-to guy in Michigan when it comes to making people homeless, he’s got all the bases covered:

“Besides his law firm that handles legal work, Trott owns or has a financial interest in the document company that processes paperwork, a newspaper that publishes required legal notices, the title companies that do the deed work, and a large real estate firm that sometimes handles the homes on which his clients have foreclosed.”

He’s a damn foreclosure Death Star, it would seem.  A veritable one-man band that only knows one depressing song: “I’m Kicking You Out Of Your House.”

Hell, before he’s done, he’ll own all of Michigan!

Torrenga has written extensively on Facebook about her situation.  For example, she is wary about leaving her house unattended, fearing that if she does, she may return to find the locks have been changed and her belongings removed.  Such fears are not at all unfounded, as noted in this story from 2010–“Banks Breaking In To Occupied Homes In Foreclosure To Change Locks“:

“In their zeal to complete foreclosure proceedings, some banks send representatives to change the locks on properties in foreclosure, even as they remain occupied. The incidents of lock-changing pile further skepticism on a process recently plagued by scandal.

A contractor for JPMorgan Chase changed the front door lock on a woman’s home in Orange County, Florida, as she hid out of fear in her bathroom, Eyewitness News reports. The woman, Nancy Jacobini, was reportedly three months behind on her mortgage and her home was reportedly in foreclosure, but, according to Eyewitness News, the bank isn’t legally allowed to change the locks on an occupied home.”

A number of times, Torrenga has also said she witnessed strange vehicles pulling up and stopping in front of her house, presumably sent to “inspect” the property.

Here is Torrenga’s own account of one encounter, from July 5th:

“Well, I got woken up by some woman, serving me more papers…eviction papers. The same as the ones I got in the mail on Thursday. I am so pissed off. She told me to get an attorney because, “These people are rotten.” Her words. I am so sick of being harassed! She said something like, “Your landlord is suing you and evicting you and you need to call an attorney.”
Pshhhyeahh right! I’m almost about to call and report that she trespassed. There’s no way that she didn’t see the signs. I’m shaking I’m so friggin pissed. I hate this.
A holiday weekend. A week before my sons graduation open house. What do I do if I leave to go the court on. Monday, or Tuesday, or even on Wednesday, the 9th? That’s the day I have to be in front of the judge. Are they going to illegally change the locks or throw our stuff out? Do they even DARE? How can these MONSTERS keep doing this to people!?”

Good question.  Answer: they’ll do it until we stop them.  And that’s exactly what KathyJo Torrenga is trying to do–stop them.

5 Responses to ALL HANDS ON DECK: FIGHTER SERVED EVICTION PAPERS