(interview with Rob Garza begins at 5:20)

As some readers know, I live in the small Southern California burg of Murrieta, which has been making national news lately.  In case you haven’t heard, a number of the immigrants that have overwhelmed Texas facilities are being flown to San Diego then bused to the Border Patrol station in Murrieta, which is about an hour’s drive north of San Diego (depending on traffic, of course–it is Southern California, after all).  Except that at least three of the buses have been turned away due to the blocking of roads by protestors:

Anti-immigration demonstrators continue to stand guard in the small southern California town of Murrieta, where upwards of 150 activists assembled last week to prevent the arrival of three buses carrying undocumented aliens scheduled for processing from reaching a local US Border Patrol station around 60 miles north of San Diego.

I must admit, I find it rather odd that: 1) these immigrants are being shipped from Texas to California when Arizona and New Mexico are much closer and there are of course Border Patrol facilities in those states (this link indicates that immigrants are in fact being flown to Arizona); 2) they are being bused from the much larger city of San Diego–right on the border with Mexico–which presumably has a much larger processing facility than the rinky-dink one in Murrieta, which again is 70 miles inland (although apparently Murrieta is considered to be part of the “San Diego Sector” even though Murrieta is in Riverside County, not San Diego County).

The site was pretty quiet today although I’m told that tomorrow will be a different story because another bus is expected.  I have driven by the protest site on two occasions–the first time was the Monday before the first bus was scheduled to arrive–June 30.  There was absolutely nothing to see.  Drove by again on July 7, and there were camera crews, flags, cops and people everywhere. 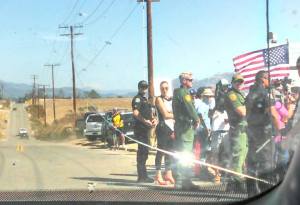 Today however, there were very few people there.  I actually had some time today to do more than just drive past and I had heard that reporters with Infowars would be there, so I knew I had to actually go to the site on foot.

Very glad I did because I not only got to meet Kit Daniels and Jakari Jackson of Infowars, I met a really cool local cat–and fellow Infowars fan–named Rob Garza.  Also met Scott Wheeler of The National Republican Trust–we didn’t agree on much, but we did have a spirited discussion.  Some pics: 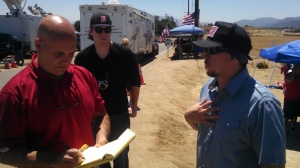 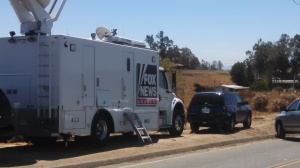 Only major news network there today

Long shot of the facility 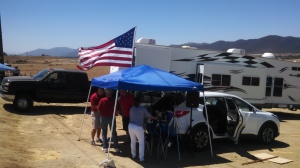