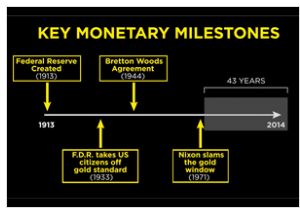 Finally broke down and watched one of the videos I had been hearing about on the Peak Prosperity website.  This video was the 9th in a series of 27 and was appropriately posted last Friday, August 15, the 43rd anniversary of the Nixon Shock, a topic covered here the same day: “How Fake Money Became Legal Money: The Affirmation of the Nixon Shock.“

The video succinctly breaks down the most significant–and literally world-changing–events in US Monetary History in the last century, pointing out that the government has no problem breaking its own laws to rig the monetary system in favor of the few at the expense of the many.  As the site puts it:

“Looking at the past 100 years of the US dollar’s history, one theme becomes abundantly clear: in times of crisis, the US government has no issue with changing its own rules or breaking its own laws. And those “temporary” emergency measures have a nasty habit of quickly becoming permanent.”

And an extremely pertinent question is raised by both the video and the accompanying article:

“But as we see the US money supply exponentially accelerating since the 1970s, and the Federal Reserve more than tripling its balance sheet since 2008, it’s only prudent to ask the question: Without constraints, are we in danger of destroying the purchasing power of our currency by making too much of it? “

For those not inclined–or without the time–to watch, here are the most significant events in the last century, according this must-watch video:

1. Creation of the Federal Reserve (1913)–as the video states, the Fed is privately-owned and is a legalized cartel allowed to create our money supply

3. Bretton Woods system created (1944)–makes the US dollar the world’s reserve currency, allows foreign nations to convert dollars into gold even though US citizens are not allowed to do this

4. The Nixon Shock (1971)–Nixon ends the conversion of dollars into gold period, often called “closing the gold window” or, as this video calls it, “slamming” the “gold window.”

5. The Pure Fiat Era (1971-present)–The video does not call this period the “pure fiat era,” but that is what it is, an era in which money can be and is created willy-nilly out of nothing in ever-increasing amounts, creating ever-larger and un-repayable debts while simultaneously polluting the value of each dollar.

It is clear that the US and the world are coming to a crisis point over money, and what money means, how it is created, who controls it, and so forth.  This is the most important subject of the day in my mind, and the more people who can have their minds opened to the true nature of our system of fake, debt-enslaving money, the quicker it can be done away with.  So please share this video, if not this article, far and wide to help hasten the end of the banker occupation.

Other LRM articles on the subject of our problematic–that is to say, fraudulent–monetary system:

THE SOLUTION: SINCE THE MONEY ISN’T REAL, THE DEBT ISN’T EITHER

INSTEAD OF BANNING CASH, GO TO SELF-ISSUED CURRENCY

UNICORNS ARE REAL–IF YOU’RE A BANK

WAR IS A RACKET TO PROP UP DOLLAR–END OF STORY

BANK SAYS: IF YOU BELIEVE BANKS LEND DEPOSITS, YOU ARE WRONG