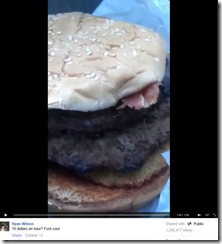 The guy in the above video is exactly right and his logic is flawless. Indeed, he’s got a point–people that make tons of money never make mistakes or get lazy. Highly-paid surgeons would never, for example, amputate the wrong limb on a patient. Oil company CEOs never let oil leak into the Gulf of Mexico. That’s another example. And that is why the class of people that work at Carl’s Jr.—who messed up this guys’ order not once but twice (!!!)– should never make a decent wage while doctors and CEOs are totally worth their millions.

“That’s what’s wrong with our country,” according to this guy—the fact that fast food workers might mess up his order means that they shouldn’t make a wage that even comes close to keeping up with inflation.  Brilliant analysis!