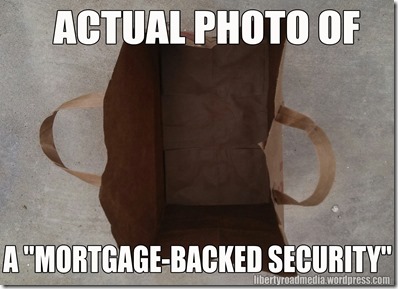 A complaint filed on January 20, 2015 in U.S. District Court for Nevada—Michael Harkey v. U.S. Bank et al. (Case No. 2:14-cv-00177-RFB-GWF)–really breaks down exactly what the scam of MERS is, and it does so with a level of clarity and certainty the likes of which I have rarely seen.  The document even gives the foreclosure fraud a more accurate name: “The MERS-LPS Racketeering Enterprise.”  While reading it, I thought, “This is too good not to share,” so here are a few selections, just from the section labeled “THE PARTIES AND THEIR RELATIONSHIPS TO EACH OTHER AND TO THE SUBJECT MATTER”, which begins on p. 3 and can be downloaded and viewed here (to save you a trip to PACER): Harkey v. US Bank

This section of the complaint begins with a recitation of the history of the different iterations of  and relationships between “MERS”, “MERSCORP”, and “Mortgage Electronic Registration Systems, Inc.” and concludes the following:

“l. The name Mortgage Electronic Registration Systems, Inc. which appears in over 62 Million Mortgages and Deeds of Trust throughout this nation actually the former name of MERSCORP and it is MERSCORP which has the “members,” owns operates the electronic tracking system registered as MERS® (purporting to be an alternative to the public records system), enters into contracts with its “members,” and establishes the Rules under which the MERS® System operations.

m. When MERSCORP created MERS III at the behest of the ratings agencies who were rating the mortgage backed securities sold by MERSCORP’s “members” and the other participants in what has been identified as the MERS®-LPS Racketeering Enterprise, MERSCORP pretended that MERS III would function in the same capacities as MERSCORP had previously functioned under the name of Mortgage Electronic Registration Systems, Inc., which was as a “common agent” for MERCORP’s “members.”

n. MERS III, as a “bankruptcy remote,” shell corporation with no employees and, therefore, no human intelligence, and having no “members,” is legally incapable of acting as an agent or a “common agent” for members of MERSCORP.” pp. 10-11

For my money (pun intended), this  is the kicker—the fact that the mortgages and deeds of trust that purport to make “MERS” the “mortgagee” or “beneficiary” would have had to have the name “MERSCORP” on them instead of “Mortgage Electronic Registration Systems, Inc.” in order for their little scheme to have even begun to have any legitimacy:

o. In order for the vaunted “common agency” to be effective, MERSCORP would have to be the named agent appearing in the Mortgages and Deeds of Trust and all “trades” would have to be conducted between “members” of MERSCORP.” p. 11

This complaint points out, as we have here at LRM, that MERS is the “invisibility cloak” of the banksters and it is this purposeful opacity that has allowed the banks and servicers (often one and the same) to collect multiple times on the alleged “default” of homeowners, via the mechanisms of the bailout, QE, credit default swaps, etc.:

“p. As will be demonstrated herein, the unregistered and unregulated securities deals and trades conducted behind the veil of MERSCORP, masquerading as Mortgage Electronic Registration Systems, Inc. in its third iteration, as MERS III, are not even supervised by MERSCORP for compliance with its own “Rules” purporting to create the common agency, by which millions of homes have been liquidated upon claimed defaults which did not actually occur.

q. The claimed “defaults” were almost always covered by mortgage insurance, credit default swaps and funds made available by Congress through the Troubled Asset Relief Program (TARP) funds, along with the Quantitative Easing (QE) programs (QE I, QE 2 and QE 3) operated by the Federal Reserve System, and were paid multiple times upon purported defaults engineered by CREDIT SUISSE and other members of the US Dollar LIBOR Panel in order to collect on multiple secondary payment systems established at the time of the unregistered securities offerings.

r. The proceeds of the ultimate foreclosure liquidations of United States homes under the MERS®-LPS RACKETEERING ENTERPRISE, in excess of the payments obtained from private mortgage insurance, unsubrogated credit default swaps, TARP funds, and QE payments are paid to the “servicers” who initiated the foreclosure process to obtain the bonus payment for liquidating this nation’s homes for defaults already cured by multiple payments.” p.11

And that’s only the tip of the iceberg of what the complaint gets into regarding MERS.  Check it out for yourself at the link above or here: Harkey v. US Bank