All Debt Is Odious: Greek Report Gets It Mostly Right

Grexit on, Grexit off…Grexit on, Grexit off…that’s been the story for a while now, but could a new report by the Debt Truth Committee of the Hellenic Parliament which declares that Greece’s debt to the Troika is odious flip the Grexit switch into a permanent “on” position?

If a debt is deemed to be “odious,”  it doesn’t have to be repaid.  Investopedia explains:

“Money borrowed by one country from another country and then misappropriated by national rulers. A nation’s debt becomes odious debt when government leaders use borrowed funds in ways that don’t benefit or even oppress citizens.”

Perfectly acceptable definition, but it doesn’t go far enough.  That is to say, it only applies to governments/countries/nations/states.  It pointedly does not apply to individuals.  But why shouldn’t it?  As you read the excerpts below from the executive summary of the Hellenic Parliament’s Truth Committee on Public Debt, notice that the very same logic that is used to declare Greece’s debt to be odious holds true for individual debt, too.  Especially when you remember—or realize for the first time if you’ve never heard it before—that all of these “loans” were created out of thin air, which is a shorthand way to say that the money to fund the loans did not exist prior to Greece requesting it.  Works exactly the same way for individuals, as discussed in many articles here at LRM.

Below I’ve just selected quotes that highlight all of this, from this copy of the Truth Committee’s report at Zero Hedge:

That’s the point of all of these fake loans, fake and odious debt—to protect financial institutions, particularly at the expense (pun intended) of the people.

“…the increase in [Greece’s] debt was not due to excessive public spending, which in fact remained lower than the public spending of other Eurozone countries, but rather due to the payment of extremely high rates of interest to creditors, excessive and unjustified military spending, loss of tax revenues due to illicit capital outflows, state recapitalization of private banks, and the international imbalances created via the flaws in the design of the Monetary Union itself.”

“State recapitalization of private banks” obviously is a more accurate term for a “bailout.”  Again, this is all about protecting financial institutions, not people.  The taxpayers are forced to make the banks whole while the taxpayers themselves are told they’ve been profligate and therefore must be subject to austerity measures.

“…the measures implemented under the “bailout programmes” have directly affected living conditions of the people and violated human rights, which Greece and its partners are obliged to respect, protect and promote under domestic, regional and international law. The drastic adjustments, imposed on the Greek economy and society as a whole, have brought about a rapid deterioration of living standards, and remain incompatible with social justice, social cohesion, democracy and human rights.”

Exactly—the banks get bailed out, the people get shaken down.  This is not just in Greece—it’s everywhere.

That last sentence perfectly sums up my point above, since it is always true both for nations as well as for individuals: private banks are always “aware that…debts [are] not incurred in the best interests of the population but rather for their [that is, the banks’] own benefit.”  And so we see that this document ends up saying exactly the same thing over and over, but in slightly different ways, which is basically comes down to this: the banks have been allowed to run amok, allowed to pretend that what they were/are doing is legal and helpful, and we are totally calling bullshit on that.  My only gripe is that, as stated above, this logic ought to transfer to private debts as well, since they work in exactly the same way.  But that leap never seems to be made, even in a document as apparently revolutionary as this one. 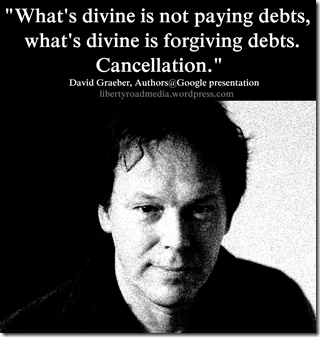