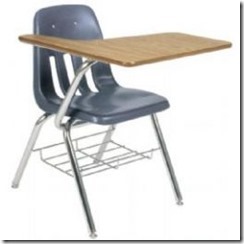 It seems that there are those who just cannot accept the idea that what Officer Ben Fields did to the young female student in the South Carolina classroom was unjustified, even though his boss has now fired him and said that Fields acted in violation of his training.  Still, some vehemently defend Field’s violent takedown of a non-violent, non-threatening young woman.

But the question must be asked—what was the objective here?  It seems to me that there is  1) the sort of reasonable objective, which is to get the student to obey the rules, and then there is 2) the objectionable objective, which is to summarily and violently demonstrate what happens to those who won’t comply, a show of force to intimidate others into compliance, which is just a hop, skip, and jump away from terrorism (and maybe not even that far from it).

Most defenders of what happened in that classroom use the reasonable objective as a cover for the objectionable objective.  That is, the defense of Field’s violence boils down to something like this: “Well, the girl was being disobedient and defiant and wouldn’t listen to any authority figure, so what choice did they have but to manhandle her?”  It seems to make sense on the surface—she repeatedly disobeys, so she must be dealt with.

But what is it that everyone, including Officer Fields, wanted this girl to do?  They wanted her to leave the room.  It was a pretty simple request, which she obviously didn’t go along with.

However, there are better, easier, and completely non-violent ways to make a student leave a classroom.  One obvious way—carry her desk out of the room with her sitting in it.   The teacher could’ve helped carry it.    It’s clear that the girl’s weight and size was not an issue for Officer Fields.  Or, slowly and carefully push the desk out of the classroom, with her still sitting in it.  Problem solved—she’s out of the room, and class can continue.  No one gets hurt, no one loses their job.  The reasonable objective—getting the students to follow the rules—has been achieved.

No one objects to making sure that students follow reasonable rules, like not disrupting class.  Schools did that fine without police officers for decades, and continue to do so.  Indeed, apparently only around 30% of schools have “resource officers” like Fields, yet apparently continue to function and even thrive.

But when you bring in a hammer—i.e., a police officer—every problem looks like a nail, as the saying goes.  So simple, non-threatening, non-violent—and completely normal–non-compliance like this South Carolina teenager exhibited gets converted from “she’s in a bad mood” to “take her down with extreme prejudice.”  A hammer’s gotta hit a nail, after all.

And a lot of the public buys into this logic, mostly because of the myth that police presence “keeps us safe.”  It’s hard to argue that this teenager in South Carolina was “kept safe” or that Fields’ violent treatment of her kept any of the other students safe.  In fact, just the opposite is true—the girl was physically hurt and one leg of her desk almost hit the student behind her in the face when it went flying.

On Facebook, I was accused of not using “common sense” in rendering my judgment of the classroom incident.  It was so obvious to my accuser that this girl deserved to be thrown about the room, all because she, like every teenager at one point or another, refused to do something an “authority” figure asked of her.  However, as can be seen, behavior like that of the police officer is only “common sense” if one thinks that the true objective of school, rules, and school rules, is to enforce the rules on pain of, well…pain.

However, it makes much more sense to find the least combative and least harmful, and non-violent way to resolve such situations.  Like simply carrying or dragging the girl’s desk out of the room, with her in it.  So, to the Richland County School District and any other school districts around the country, I’m available for common sense consulting for a reasonable fee!