Conspiracy fact: Actual proof that banks create money out of nothing (Part 1) 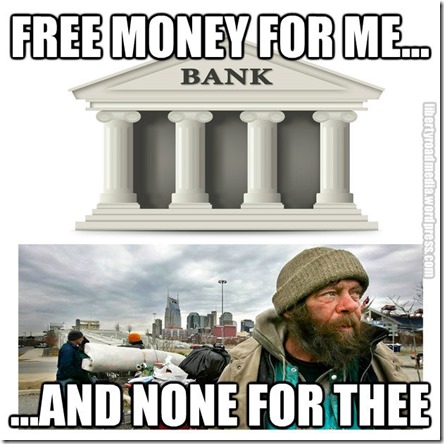 Here at LRM, I have written a great deal about the fact that banks create money out of nothing, ex nihilo, out of thin air.  This assertion was made after extensive research into the money-creation process, and I found that this information was not only not secret, but also that the information is common knowledge among economists and those like me who take an interest in such matters.  In fact, the only group which seems surprised to hear and then resists the fact that money is created out of nothing is, well, a rather large group—the general public.

This surprise and resistance of the general public is due to any number of possible reasons—misinformation, mis-education, apathy, lack of interest, genuine support for the current system, etc.  But perhaps the biggest reason people tend to be surprised by and resistant to the idea—in the unfortunately unlikely event that they ever even presented with the idea—is that they think it can’t be true because there’s no proof that it’s true.  They think that anyone who says that banks create money out of thin air is just a conspiracy theorist, a communist who hates banks and capitalism, a sufferer of paranoid delusions, or some combination of all of those.

Except they’re wrong that there’s no proof—in 2014, noted economist Richard Werner proved beyond a shadow of a doubt that any run-of-the-mill, local bank (not just the central banks of the world) can and does, as a matter of course, create money out of nothing.  The only problem is that Werner’s findings are almost completely unknown–not just to the general public, but also to people like myself who actively seek out this information.  Indeed, Werner’s case study was published in “The International Review of Financial Analysis” in December 2014 and I heard nothing about it at all until I stumbled upon it earlier this year.  If it weren’t online, I likely would still have never heard about it.

Published under the title “Can banks individually create money out of nothing?—The theories and the empirical evidence,” Werner’s paper needs to become the new common knowledge.  This article seeks to amplify Werner’s extremely important findings, and I am making this a series in order to keep the length of the articles to a bare minimum in order to avoid the dreaded “TL;DR” syndrome.

How it was proven

Let’s begin with Werner’s conclusion: yes, banks can individually create money out of nothing.  Here’s how he puts it (section 5.2 of the article):

“Thus it can now be said with confidence for the first time – possibly in the 5000 years’ history of banking – that it has been empirically demonstrated that each individual bank creates credit and money out of nothing, when it extends what is called a ‘bank loan’. The bank does not loan any existing money, but instead creates new money. The money supply is created as ‘fairy dust’ produced by the banks out of thin air.32 The implications are far-reaching.”

It sounds unbelievable, but Werner proved it: any time you were “lent” money from a bank, the bank created the money out of thin air.   “What’s the problem with that?”  is a question I’m sure some readers will be asking in their heads.  Well, here’s a few:

1) The bank took no risk to “loan” you the money, because it just literally made up the money—so there’s really nothing to “repay” and there’s really no justification to charge interest because the bank is not having to do without the amount it “loaned” you.

2) Some people are turned away by banks when they ask for “loans” to start a business, buy a house or car, or go to college (or they’re charged exorbitant interest) and so banks are therefore allowed to pick winners and losers in society.

3) Banks are stealing money from you as a “borrower” because they’re charging you a rental fee (i.e. “interest”) on money which they a) didn’t have before you asked to borrow it, b) “created” by a few keystrokes into a computer, and c) therefore never really exists at all.  In other words, you’re being charged money you actually have to perform labor for in order to “pay them back” money which certainly didn’t exist before you “borrowed it” and only exists—to the extent that it can be said to exist at all—as binary code in a computer database.  If that’s not theft by fraud, then there is no such thing.

4) You can only get money by performing labor, whereas banks are allowed to just will it into being.  It’s pretty easy to see who has the advantage in such a situation, and it isn’t you or me that has the advantage.

In the simplest possible terms, the problem is that banks get free, infinite money, and you don’t (hence the meme at the beginning of the article).  They get something for nothing while trying their damnedest to make sure no one else does.

So how did Werner prove it? Pretty simple, really, yet quite revolutionary.  He found a bank that would give him a loan and then let him see their books the day before and the day he got his “loan.”  Werner’s summary (section 5.2):

“It was examined whether in the process of making money available to the borrower the bank transfers these funds from other accounts (within or outside the bank). In the process of making loaned money available in the borrower’s bank account, it was found that the bank did not transfer the money away from other internal or external accounts, resulting in a rejection of both the fractional reserve theory and the financial intermediation theory. Instead, it was found that the bank newly ‘invented’ the funds by crediting the borrower’s account with a deposit, although no such deposit had taken place. This is in line with the claims of the credit creation theory.”

Long story short, Werner asked for a loan.  The bank created an account in his name and deposited €200,000 into it.  The bank did not check to see whether or not it had that amount on hand to give to him, nor did they inquire of any central bank or other banking authority whether or not they had that amount to spare in reserves.  They just made it up and put it into his account and Werner was in fact able to spend that money.  The bank director admitted it in a signed letter to Werner:

“…neither I as director of Raiffeisenbank Wildenberg eG, nor our staff checked either before or during the granting of the loan to you, whether we keep sufficient funds with our central bank, DZ Bank AG, or the Bundesbank. We also did not engage in any such related transaction, nor did we undertake any transfers or account bookings in order to finance the credit balance in your account. Therefore we did not engage in any checks or transactions in order to provide liquidity.”

We’ll look at what all this means a little more in depth in Part 2.

7 Responses to Conspiracy fact: Actual proof that banks create money out of nothing (Part 1)