Remember last week’s video of the cop who said he doesn’t have to  follow the Constitution?

And remember that the Constitution says the following:

“Congress shall make no law respecting an establishment of religion, or prohibiting the free exercise thereof; or abridging the freedom of speech, or of the press; or the right of the people peaceably to assemble, and to petition the Government for a redress of grievances.”

Surely you have heard by now that the police in Ferguson, Missouri are in fact abridging all of the rights in bold above.  To be sure, the cop that said he doesn’t have to follow the Constitution was in New Jersey, but it looks like the cops in Missouri—and rest assured, across the entire country—got the same memo.

Watch this video and see whether or not you think the right to peaceably assemble is being violated or not:

How about this story—would you say that the freedom of the press is being abridged or not:

“Wesley Lowery of the Washington Post and Ryan Reilly of the Huffington Post told AP they were working in a fast-food restaurant when Special Forces entered the premises and started clearing them out. Reilly tried to take a photo, and police demanded his ID, which he lawfully declined to provide. The officers detained him regardless, according to Huffington Post official statement, ‘for not packing up fast enough.’

The Al Jazeera- America crew was also attacked and tear-gassed by security forces as they tried to film the protest. The team had thought they had reached a safe area when they were tear-gassed, said Al Jazeera’s Ash-Har Quraishi.

‘The Al Jazeera crew were in a place we believed to be safe,’ he said. ‘Soon afterwards people started running toward us, saying they were being fired on with rubber bullets. Rubber bullets were fired on us, and then a canister. We had to retreat into the neighborhood.’”

The people’s reaction is natural

When an unarmed person is gunned down in the street, it is completely natural for people to get upset.  The answer to situations like this is not for the people to calm down.  The answer is for the police to stop murdering people.  And stop violating the Constitution.

As for the looting and the rioting, who’s really doing the most and worst looting?  A few dozen people in Ferguson?  Or several thousand on Wall Street? 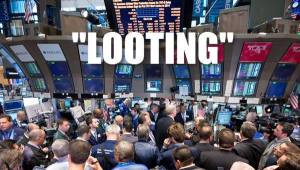