WTF? BANK OF AMERICA AND FANNIE MAE SUPPOSEDLY HAVE THE SAME ADDRESS AND PHONE NUMBER

If we were to discover that a Mob boss shared the same address and phone number with a legitimate business–like a liquor store or some such—what would we say about that liquor store?  We’d say that the liquor store was a front company for the Mafia first and foremost, and a legitimate purveyor of spirits only secondarily.

That’s what essentially seems to be going on with Fannie Mae and Bank of America, who inexplicably use the same address–400 National Way Simi Valley, CA 93062-6298–and phone number on a 1099-A tax form I received.  But which is the front for which?  Not sure.  Here’s the form, with my personal info redacted:

Or could it be that Bank of America and Fannie Mae merged and didn’t tell anyone?  Did Bank of America buy Fannie Mae or the other way around–and not tell anyone?  WTF is going on?  Apparently the “National Way” is to try to cover up all the fraud, even at the end of line, trying to pull the wool over the eyes of the IRS after having succeeded in doing it to the courts and the majority of the public.

Anyway, I looked at the 1099 and I had a hard time getting past the fact that the very first box, for “Lender,” lists Fannie Mae, an entity which is never a lender (“If you are looking to apply for a Fannie Mae loan you might be surprised to learn that the mortgage giant does not provide mortgages directly to borrowers”).  At least, Fannie Mae didn’t lend anything to me. 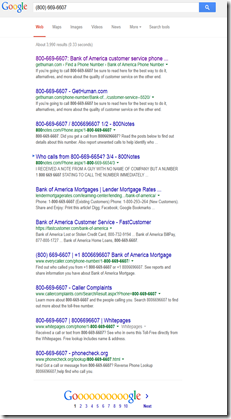 Even a mortgage site gives the same number for Bank of America which is listed as the phone number for “Fedl Natl MTG ASSN” on my 1099-A:

However, the “federal identification number” given on the 1099 is definitely Fannie Mae’s: 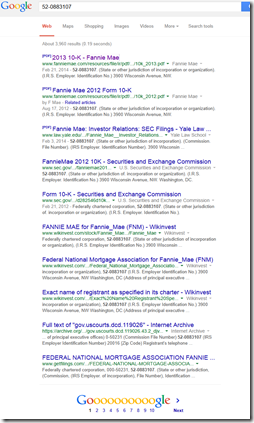 Back to the address: if you Google the address listed for Fannie Mae on the 1099—“400 National Way” “Simi Valley”—the results are all for Bank of America entities:

And if you Google “fannie mae address,” you get an address in Pasadena, not one in Simi Valley, as seen below.  The Pasadena address likely comes up in my search because I’m in Southern California, but I don’t know that for sure.  I just know that Fannie Mae’s headquarters are in Washington, D.C.  and I would’ve thought that a generic search for “fannie mae address” would’ve given the Washington, D.C. address.

I feel sure that some if not most people—judges, mainly—would receive this information with a shrug of the shoulders.  So two different companies share an address and phone number.  Big deal.  Yeah, maybe—if they were just some two-bit widget manufacturers looking to save on office space rental fees.

These two companies, however, are obviously two of the biggest players in the mortgage mess and foreclosure fraud fiasco of the past 7 + years.  This isn’t some sublet deal to save a few bucks.  This is an attempt to mislead someone, I’m just not sure who.  If I send mail to Fannie at that address, does BoA see it?  And vice versa? Same with the phone number—I’m trying to call Fannie but BoA answers?

Are these two nimrod companies trying to mislead the government?  If so, I would think that the jig is up because as conservator of Fannie Mae, it seems like the government would be aware of the joint BoA/Fannie Mae address and phone number situation.  So is the government somehow in on this?  Are we to assume that the government is in BoA’s business, via its ward Fannie Mae?  And that the government is presumably okay with two supposedly independent companies—both of which are continually involved in multiple multi-billion dollar settlements, ongoing bailouts and fraud claims, etc.—passing each other off as…each other?

This seems to lend more credibility to the non-negotiation theory

My last comment—I have long been of the opinion that there was no securitization of any promissory notes.  That is, that the “mortgage-backed” securities—MBS—are actually “nothing-backed,” backed by nothing at all because the notes never left the hands of the originating lenders.  And in fact, that was the intention the whole time—that the promissory notes would never be negotiated to any parties on the secondary market and would instead be held by the originating lenders.

Two reasons for this belief of mine: 1) We know that Countrywide (which Bank of America stupidly bought) did not endorse notes in the regular course of business, as testified to by Linda DeMartini in the case of Kemp v. Countrywide and as Abigail Field found in an investigation into foreclosure cases in New York, and 2) that Bank of America/Countrywide’s Michele Sjolander testified that my note never left Simi Valley even though it was claimed to be owned by Fannie Mae, and implying that this was more or less standard procedure.

So from those sources, we know or can reasonably infer that Countrywide/BoA did not endorse or transfer notes, the two legal requirements for negotiation.  And that may have been because the notes were in fact non-negotiable, and intentionally so.  I first saw the “non-negotiation theory” floated by Florida attorney Matt Weidner, who had apparently learned of it from famed bankruptcy attorney Max Gardner.  Here’s Weidner’s take on it:

673.1041 Negotiable instrument.””
(1) Except as provided in subsections (3), (4), and (11), the term ” negotiable instrument” means
an unconditional promise or order to pay a fixed amount of money, with or without interest or other
charges described in the promise or order, if it:
(a) Is payable to bearer or to order at the time it is issued or first comes into possession of a
holder;
(b) Is payable on demand or at a definite time; and
(c) Does not state any other undertaking or instruction by the person promising or ordering
payment to do any act in addition to the payment of money.

Now, we’re all stuck with exactly that definition. Before we examine the note in this case, let’s first think about what a negotiable instrument is….a check made payable to a person for $100. An IOU for $100.   Bills of lading with a total included.   It’s all real simple.

So now that we’re fixed about what a negotiable instrument is, let’s examine what it ain’t.   What ain’t a negotiable instrument, as defined by Florida law is the standard Fannie/Freddie Promissory note and the following paragraphs are the primary reasons why.   Read each one carefully and ask, “Are these sentences conditions or undertakings other than the promise to repay money?” (Of course they are)

So the banks and Fannie Mae knew that these notes were not negotiable.  And so they never negotiated them.  Why should Countrywide/Bank of America physically transfer or endorse a note to Fannie Mae when apparently, Fannie Mae and Bank of America are somehow one and the same, or at least share an address and a phone number?

Here’s another strong possibility—like the fraudulent MERS assignments polluting land records across the country, this 1099 and others like it are more fraud.  Here’s why I say this—this document was prepared, issued, and sent to the IRS by Bank of America, not Fannie Mae.  Again, just like the foreclosures, Fannie Mae doesn’t do any of the paperwork.  Is that because Bank of America is supposedly the servicer for Fannie Mae, or is that because Bank of America is now and always has been the holder of the note because 1) the note was non-negotiable and 2) the “securitization” therefore never actually happened, meaning that Fannie Mae was always just a ruse?

As you’re mulling that over, consider this information about fake 1099 forms (from a tax attorney website):

Anyone who has your social security or taxpayer identification number can file a Form 1099 with the IRS claiming to have paid you a sum certain during the tax year.

Whether or not you actually received the amount shown on the 1099 is irrelevant. The IRS assumes you got the money and will attempt to match it with the amounts you included in income on your tax return. If the numbers don’t match, you’ll be the subject of an investigation.

Look at that first sentence again—anyone who has your info can issue a 1099 against you.  Anyone, like for instance, a bank.  And the IRS just assumes it’s all above-board. So I wonder why, if my property was owned by and bought at the foreclosure auction by Fannie Mae, isn’t Fannie Mae issuing me the 1099?  At what point in this convoluted process does Bank of America stop being the servicer for Fannie Mae?  If in fact Bank of America ever was the servicer for Fannie Mae.  Which they weren’t, by the way—because there was never any securitization, as Eric Mains very aptly describes in the new bombshell article posted over at Living Lies:

“What the banks, government, and various agencies apparently have done for the last 8 years is use legal fiction to pretend the transactions have occurred. They have allowed the banks to account for transactions that are stated to have occurred, regardless it seems, in face of the facts.”

So what we have then, is the 1099 being filled out in exactly the same way as the fraudulent MERS assignments—by people who don’t work for who the documents say they work for and without any authority to do anything on behalf of anyone, and all presumed by the proper authorities to be true and correct.  Unbelievable.

Final random question—does Bank of America share an address and/or phone number with a physical location that is normally associated with Fannie Mae?  I mean, Fannie has office space with Bank of America, why shouldn’t the reverse also be true? I realize I have more questions than answers and that in the end this may be much ado about nothing, but WTF?

I’d love to hear comments about this below.

That same exact address was listed for the “purchaser” of two different properties, one “purchaser” being Bank of America and the other being Deutsche Bank National Trust Company.  It differs slightly from the 1099 addresses listed above, but is obviously the same number, street, and +4 ZIP number.

Apparently Bank of New York Mellon uses this same P.O. Box. And US Bank. And these other banks use this Bank of America address whether or not Bank of America has anything to do with the foreclosure, at least according to these Post Sale Lists out of Colorado.

NOTE: If one looks at 400 National Way on Google Earth, one can see that the Bank of America name and logo are prominently displayed over side entrances to the building.  The Fannie Mae logo is not displayed.  Nor is the US Bank, Deutsche Bank, et al. names or logos displayed outside.  In other words, it’s a Bank of America building.  Not really any getting around that.

9 Responses to WTF? BANK OF AMERICA AND FANNIE MAE SUPPOSEDLY HAVE THE SAME ADDRESS AND PHONE NUMBER