FBI, Secret Service members of MERS, but why?

Posted on February 8, 2016 by eggsistense

Compelling talk on MERS for those who may not know what the hell MERS is and/or claims to be.

Apparently, the FBI and the Secret Service are members of the opaque, fraud-enabling/title-laundering racket known as MERS.  But why?  Neither the FBI nor the Secret Service are in the real estate business or in the lending business…or are they?  Does that explain why justice in most foreclosure defense cases is in such short supply? As Clouded Titles points out:

One would then begin to wonder how the FBI could pursue MERS or MERSCORP in investigating potential criminal RICO implications involving the electronic database, such as those alleged in the Osceola County Forensic Examination.  Wouldn’t this pose a conflict of interest?  Why would the FBI choose to investigate MERS and MERSCORP if it’s given unfettered access to the MERS® System by MERSCORP?  Could it be because of Eric Holder’s position as Attorney General at the time?   Certainly, the dates of these two entities’ entry into the MERS business model would certainly shed some light on “who’s protecting who here”.

Taxpayer money used for this?

Presumably, taxpayer money is being used to pay the fees required of MERS members, and here is just a sample of those fees:

The ultimate purpose—ostensibly–of MERS is explained thusly on the MERS website:

“Mortgage Electronic Registration Systems, Inc. (MERS), a subsidiary of MERSCORP Holdings, serves as the mortgagee in the land records for loans registered on the MERS® System, and is a nominee (or agent) for the owner of the promissory note.  The MERS® System is a national electronic database that tracks changes in mortgage servicing and beneficial ownership interests in residential mortgage loans.”

The ultimate purpose of the FBI?

As an intelligence-driven and a threat-focused national security organization with both intelligence and law enforcement responsibilities, the mission of the FBI is to protect and defend the United States against terrorist and foreign intelligence threats, to uphold and enforce the criminal laws of the United States, and to provide leadership and criminal justice services to federal, state, municipal, and international agencies and partners.

The FBI focuses on threats that challenge the foundations of American society or involve dangers too large or complex for any local or state authority to handle alone. In executing the following priorities, the FBI—as both a national security and law enforcement organization—will produce and use intelligence to protect the nation from threats and to bring to justice those who violate the law.

What in the FBI’s mission has anything to do with being a mortgagee or working with promissory notes?  Pretty much nothing—not directly, anyway.  If anything, the FBI should be investigating MERS under priorities 3, 4, and 7.  For starters.

Keep your eyes and ears open.  As for me, when Clouded Titles asks in its headline “Is It More Evidence That The Government Is In Bed With The Banks?” I am inclined to answer in the affirmative.  Because it’s kinda hard for the Feds to side with homeowners in a foreclosure case when the Feds are actual members of a corporate entity—i.e., MERS–that is a major part of the problem where wrongful foreclosures are concerned.

Oh, and HUD is also a member of MERS. At least that makes a bit more sense. 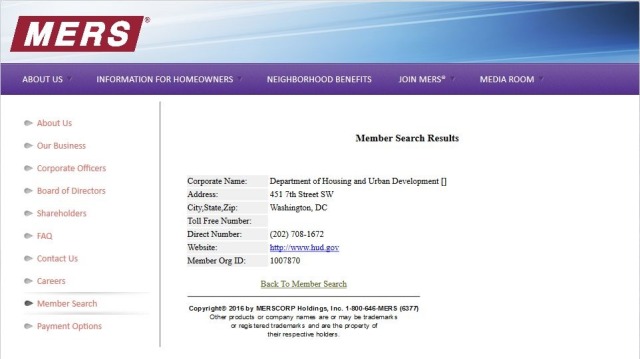