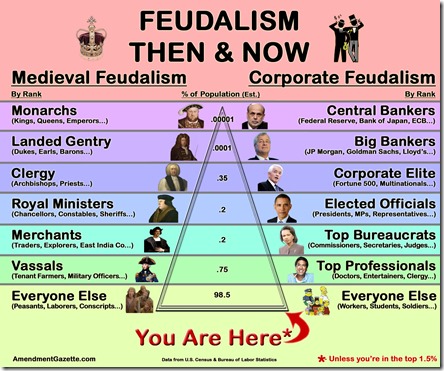 Great post at More Crows Than Eagles called “Unnecessariat”–heavy stuff, all about the effects of supposed “capitalism” which is actually an oligarchy (feudalism?) on steroids which is by, of, and for the rentier class:

“If there’s no economic plan for the Unnecessariat, there’s certainly an abundance for plans to extract value from them. No-one has the option to just make their own way and be left alone at it. It used to be that people were uninsured and if they got seriously sick they’d declare bankruptcy and lose the farm, but now they have a (mandatory) $1k/month plan with a $5k deductible: they’ll still declare bankruptcy and lose the farm if they get sick, but in the meantime they pay a shit-ton to the shareholders of United Healthcare, or Aetna, or whoever. This, like shifting the chronically jobless from “unemployed” to “disabled” is seen as a major improvement in status, at least on television.”

Reminded me of a Facebook post by the great art-ivist and system-bucker Scott Sorensen, who has had to relocate his camp in the last few days:

“I’ve concluded that it is immoral for one group of people to buy large amounts of land and charge another group rent to live on their native planet. You may argue that they bought that land legitimately from some other person who maybe inherited it from someone else who ‘discovered’ it. Yeah right. They ‘discovered’ it from native Americans through force and trickery.
Well, I just ‘discovered’ some land off the interstate, and I don’t see anyone there. Rent is free. Building shit.”

“Scott–just chiming back in to say you nailed it, as usual. The rentier system is parasitism at its worst, it’s the desired (if unstated) goal of the enclosure movement–i.e., homelessness and/or wage slavery for the many and security for the few. It goes against the natural order of things. We’re always pointed to the animal kingdom for examples of how things REALLY are, especially predators and prey. ‘Survival of the fittest’ and all that rot. Why don’t they ever point out that if the predators killed all their prey, the predators would themselves die out? Somehow even ‘dumb’ animals realize they can’t and shouldn’t have it all. That is to say, even animals jolly well know that we’re all in this together, interdependent, and that the existence of even the top of the food chain is only made possible by the existence and well-being of the bottom of it.”

We all notice this stuff, don’t we? But only some of us seem to be able to admit it to ourselves.  We all know that the system is not working, but so many people have convinced themselves that it is working.  They’re actually right, I suppose—the system does work, just not for the “Unnecessariat,” the workers, the doers, the “consumers.”  It works very well for the parasites at the top.  But for how much longer will we let them eat out our substance?  We can’t afford the bastards anymore, if we ever could.  They’d best beware that one way or another, their darkness has got to give…