So this story appeared in my Facebook feed this morning–“Another Banker Dead: IRAN Executes Rothschild Billionaire On $2.6 Billion Bank Fraud ~ Used Fraudulent Funds To Implement Agenda 21 In Buying State Property.”  So I check it out with a bit of skepticism, and sure enough (although it turns out that he wasn’t a banker–although apparently he wanted to start one), he was at the center of the largest bank fraud in Iran’s history and for that he was hanged!  The Independent tells us:

“A billionaire businessman that was responsible for the biggest bank fraud Iran has ever seen has been executed, Iranian state media has said.  Mahafarid Amir-Khosravi, also known as Mansour Aria, was hanged at Tehran’s Evin prison on Saturday after being convicted of a scam that was said to have cost Iranian banks nearly £1.5 bn.”

The amount of the fraud is even bigger when expressed in American funny money: $2.6 billion.

America exceptionally tolerant of fraud, unlike say–Vietnam and Iceland (and Iran, of course)

We need only look to the case of one Bernie Madoff to see that America is exceptional, all right–exceptionally tolerant of fraud.  The Iranian dude’s scam only cost $2.6 billion and he got executed–hanged by the neck until dead.  Madoff’s fraud cost his victims a lot more than that; most people agree on a figure somewhere between $10-$20 billion.  Unlike the Iranian dude, though, Madoff is very much alive and well.

Vietnam executes bankers for less than what Madoff did, as pointed out here:

“In the past five months, at least three Vietnamese bankers have been sentenced to death — though their crimes amount to just 1 percent of Madoff’s haul.

Last month, a 57-year-old director of a Vietnam Development Bank was sentenced to death after he and 12 others approved counterfeit loans in the amount of $89 million. For inking those contracts, he got a BMW, a diamond ring, and $5.5 million in kickbacks. His death sentence follows similar punishments meted out to two other bankers: One was sent to death row in November for his part in a $25 million scam, and the other, banker Duong Chi Dung, got his in December.”

And don’t forget Iceland, who also let banks fail and sent bankers to jail, not to the trough of bailout money:

“An Icelandic court has sentenced four former Kaupthing bankers to jail for market abuses related to a large stake taken in the bank by a Qatari sheikh just before it went under in late 2008.”

America would never do any of that!  To the bankers and the financiers and the middlemen, that is.  To you and me, they’ll do it all day long.  American exceptionalism–doesn’t it just make your heart soar with pride? 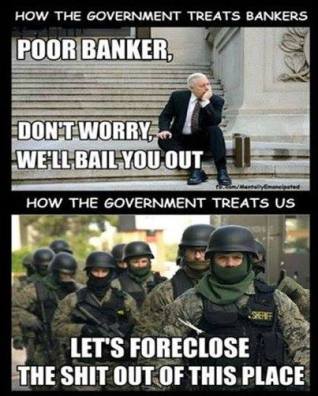 We tolerate price-gouging as well!

In a tangentially-related development, notice that America is the exception to the rule of developed countries providing high-quality care to its citizens at a low cost, as indicated here:

“The United States health care system is the most expensive in the world, but this report and prior editions consistently show the U.S. underperforms relative to other countries on most dimensions of performance.“

Maybe this isn’t so tangentially-related, perhaps this healthcare price-gouging is directly related to other financial fraud.  Pretty much has to be, doesn’t it?

Against the death penalty?
One last bit–I’m against the death penalty.  I don’t believe the state should be allowed to kill anyone.  Simply pointing out that other countries are much less tolerant of fraud than we are.  In fact, in our great country, people who try to–and do, a la Mary McCulley–expose fraud, the government puts them in jail doing hard time.  See, for example: “MARY MCCULLEY IS A THREAT TO FRAUD, NOT TO BANKS OR THE PUBLIC.”