Quantum Theory of Fake Money and Fraud: “The black hole of debt is starting to warp the financial universe”

Professor Max “Planck” Keiser again breaks down for us what is really going on in Episode 827 of the Keiser Report.  Professor Stacy “Einstein” Herbert tells us that in the past few episodes, she and Max had been talking about charts that showed the real economy diverging from the financialized economy in a way that had never happened before. 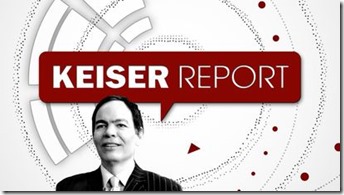 “…because there has to be—just like when an astrophysicist, or somebody like Einstein looks out into the universe—they’ve never actually observed a black hole.  What they are able to determine—that there are black holes—is by the effect around it.

So I was like, ‘there has to be some hidden force there that we’re not capturing’ [she points to the chart, pictured above]…All sorts of charts in our financial universe used to go together, now they’re separating.” 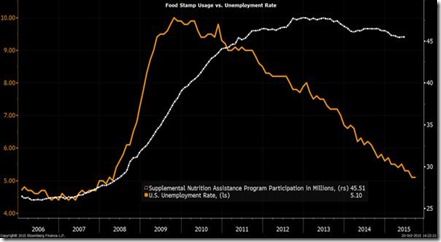 She then shows the chart above titled “Food Stamp Usage vs. Unemployment Rate” (unemployment is the orange line, food stamps the white line).  Indeed, in both charts, it is obvious that until about 2007 or so, credit and GDP moved together as did food stamp use with unemployment.

So what happened?  What changed?

“As you can see, there’s some sort of hidden force there that’s driving them apart in a way that shouldn’t exist.”

Shouldn’t exist, that is, if the markets weren’t rigged and the whole financial system weren’t based on fraud, securities that are as valuable as empty paper bags, etc.

“So there’s a hidden force, and I think this is the financial fraud and the deflation going on.”

Max, as usual, sums it all in very pithy phrase:

“The black hole of debt is starting to warp the financial universe.”

And economist Steve Keen pointed out the same thing in the same terms—i.e., “black hole”–in a recent episode of the Keiser Report:

But when debt is created by a bank, it writes a positive entry for itself on the asset side saying “Here’s a loan, which we’re going to get an income stream from you out of,”  and a negative entry for itself on the liability side saying “Here’s the money we have loaned you.” And it’s simply double-entry bookkeeping. There’s no cost involved in doing it.  So if we set it up and rewrite it, debt can be written off easily, and in fact if you don’t allow debt write-offs, capitalism will always collapse into a black hole of debt.  And that’s what we’ve got.   Greece, unfortunately, is deepest into the black hole.

And that is the problem with the fake money system—i.e., “quantum-tative” easing (based on Max and Stacy’s comments above)–to which we are currently more or less enslaved.  The fake money created by the banks and enforced on pain of asset confiscation (i.e., foreclosure) if not outright imprisonment is the problem.  And only until there is some kind of national acknowledgment, even in secret, that this is so—and then action taken to correct it–the problem will continue until either a) everyone in America but the 1% is starving and homeless, or b) WW III begins.